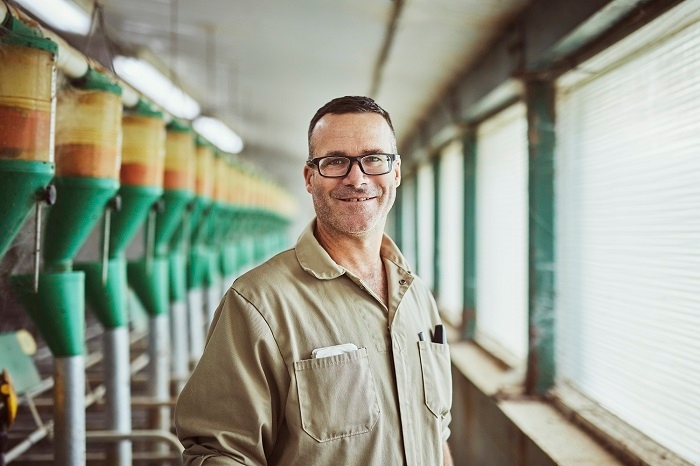 Alexandre Coupal launched his 600-sow-to-farrowing operation in Saint-Bernard-de-Michaudville in Quebec’s Montérégie region after buying out his father’s farm in 2000. In 2014, he built a new maternity unit to house sows in groups. “I was one of the first to make modifications of this type to better meet the latest animal welfare standards,” Coupal said. “There wasn’t much data on this new way of managing a farrowing operation at the time. Our methods have evolved with our hands-on experience.”

“You really have to develop a keen seen of observation to manage your animals effectively,” he said. “While I do get phone alerts notifying me of any abnormalities, like when any sow’s not eating her daily portion, it’s up to me to keep a close eye on all the sows to determine the reasons why some are not eating enough.”

And to ensure that the sows don’t get lonely, Coupal keeps the radio on in their unit, a proven method of enriching their environment that ties into animal welfare considerations. “In the farrowing area, I leave the radio tuned to a public radio station 24/7 so they can enjoy good music as well as people in conversation,” he said. “That way when the animals hear someone talking in the birthing area, they stay calm since they’re used to hearing voices and ambient background noise.”

“You have to be open to change and be able to adapt to new situations. I know this can be unsettling at first because it’s a new way of doing things,” Coupal said. “You never know how the sows in your barns will react. But when you’re the breeder and you’re there to make sure all goes well, everyone – animals and workers alike – adapts. I couldn’t go back to the way things were before considering how much management quality and the environment for the sows has improved. The animals really are at peace.” 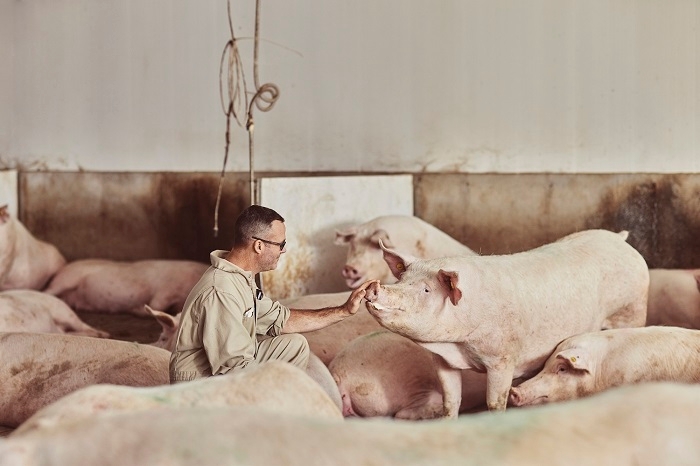 In terms of governance, Coupal has always been guided by a healthy work-family balance, both for himself and his two employees, and by own his intuition. “My goal is to run a business that’s big enough to be profitable, but not so big that I have to sacrifice my family life to make it work,” he said. “Working to improve my productivity and margins through best practices is also a profitable approach. That way I can make sure everything is done right without having to cut corners.”

To stay up to date on the latest trends, he makes a point of attending conferences and workshops that cover all aspects of production. He says he never misses the Pork Show, for example, where he gets to see breaking developments in the industry from around the world.

With a view to always staying at the industry forefront, Alexandre Coupal is also actively participating in a research study on optimal sow nutrition. His farm has been part of a nutrient and supplement testing program for the past few years. “One of the many benefits is that I know in advance how effective the products will be when they become available on the market, because I will have tested them on my own sows,” he said. 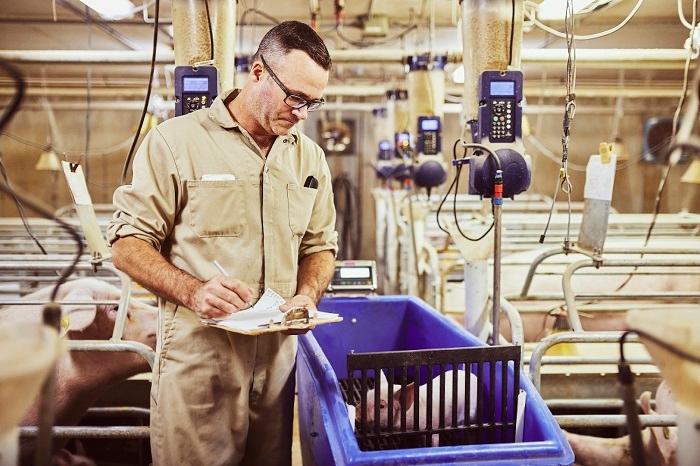 The importance of having a mentor

One of the most beneficial best practices for assessing his own management skills was having a mentor he could count on. He’d been running his business for about five years when he hit a very rough patch in 2010 that included two episodes of porcine reproductive and respiratory syndrome virus (PRRSV) that severely tested his revolve and pushed his finances to the limit.

“The way things were going I felt I needed to get advice from outside the pork sector. I wanted someone to have a general look at my business and get their opinion on the overall management of my farm,” Coupal said.

He ended up asking a neighbour, a dairy farmer with an operation going back several generations, for help. One good piece of advice was to use a number of different creditors instead of depending on just one. “It was definitely easier this way to get support for growing my business. When you several creditors, for example, they all must come to an agreement. They can’t just cut you off the first time you find yourself in a difficult situation,” he said.

Concern for the environment

Coupal also owns 50 acres of land that he rents out to a farmer. He makes sure that his tenant adheres to sound farming practices, including fertilizing the field with green manure in the fall to loosen up the soil. He’s installed riparian strips as well to protect his topsoil and waterways.

Coupal also planted an odour-breaking hedge around his buildings as soon as he set up his business, and four years later he planted numerous trees on the perimeter of his property. He uses water meters not only to reduce waste but to maximize water consumption for the sows, carefully checking that all water stations are working properly with a sufficient supply for the animals at all times.

Gifts of meat and of his time

Alexandre Coupal is also very committed to his community. First of all, he welcomes interns interested in careers in pork production or as veterinarians. “I was lucky enough to get some internships myself,” he said, “and I think it’s very important to pay it forward.”

He also donates meat to the Fabrique de Saint-Bernard-de-Michaudville and to other organizations that hold raffles to raise funds. Above and beyond donations, he believes it’s important to volunteer by giving a helping hand to the community and those in need.

“I repaired the asphalt shingles on a neighbour’s roof to help her out. She wanted to pay me for the work, but I told she could pay me by helping someone else out at some point. For me, the most important thing you can give when you volunteer is your time,” he said. “That’s a belief I try instill in my three kids and why I sometimes take them along with me in fulfilling my community commitments.”